Thank you for your interest in my music.  I received a Bachelor of Music in classical guitar performance from the University of Georgia (1991). Throughout the nineties, I was involved a variety of musical pursuits, primarily based out of Atlanta, GA, which included teaching private music lessons, running recording studios of various incarnations, and performing with several jazz and R&B groups. I also was a part of an oldies band that performed for over 10 years. In addition to corporate parties, weddings, and festivals, we did shows backing popular artists of the 50’s and 60’s, such as: Archie Bell (“Tighten Up”), Dennis Yost (“Spooky”/”Stormy”), Percy Sledge (“When a Man Loves a Woman”), and Shaun Nielson (former backup singer w/Elvis).

As a classical guitarist, I was a chosen recitalist in the Christopher Parkening master class 2000 in Bozeman, Montana, which led to an opportunity to perform a solo classical guitar concert at the University of Houston at Clearlake in March 2002.

In 2003, I joined the Navy as an MU (Musician). It is the only rate in the Navy where one must pre-qualify by way of a formal audition. I spent a tour of duty in Norfolk, VA with the U.S. Fleet Forces Band from 2003-2006, in Yokosuka Japan with SEVENTH Fleet Band 2006-2008, and am currently stationed at the Naval Academy Band in Annapolis, MD.

Those of us who hungrily scan the music world in search of genuine musical experiences are always watching out for that performer who is unique, yet undiscovered. Ben Coker is such an artist. One has only to hear Coker’s persuasive tone, the incredible palette of colors from which he is able to choose, and his modest virtuosity to recognize a talent worthy of the first attentions of an audience. Yet it is his utmost sincerity and lack of pretense that makes him unique and worthy of repeated listening. –Adam Cole 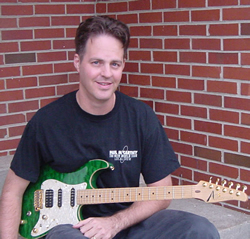